Thank you to everyone who visited the Fancy Pants: A Celebration of Style 1920-1945, our vintage fashion exhibition, this Summer! We were over the moon with the fantastic comments from visitors!

If you didn't have chance to see the exhibition in person or would like another look, we've now added a 'Tour the Exhibition' page to this blog, where each section of 1920s, 1930s and 1940s fashion, and each garment that was on display is shown. View it here, or click on the page link at the top. 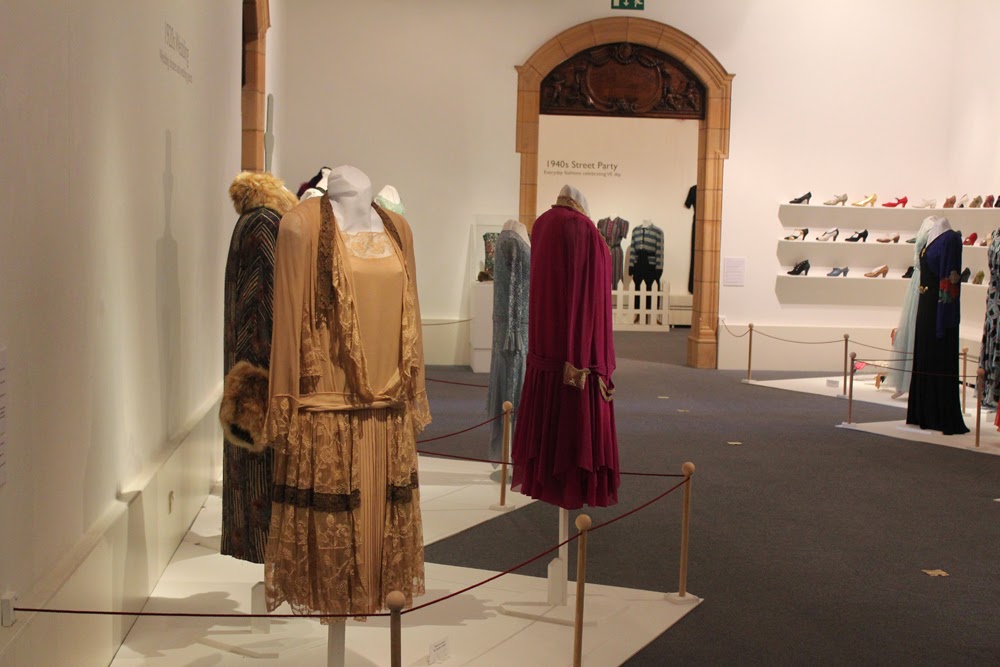 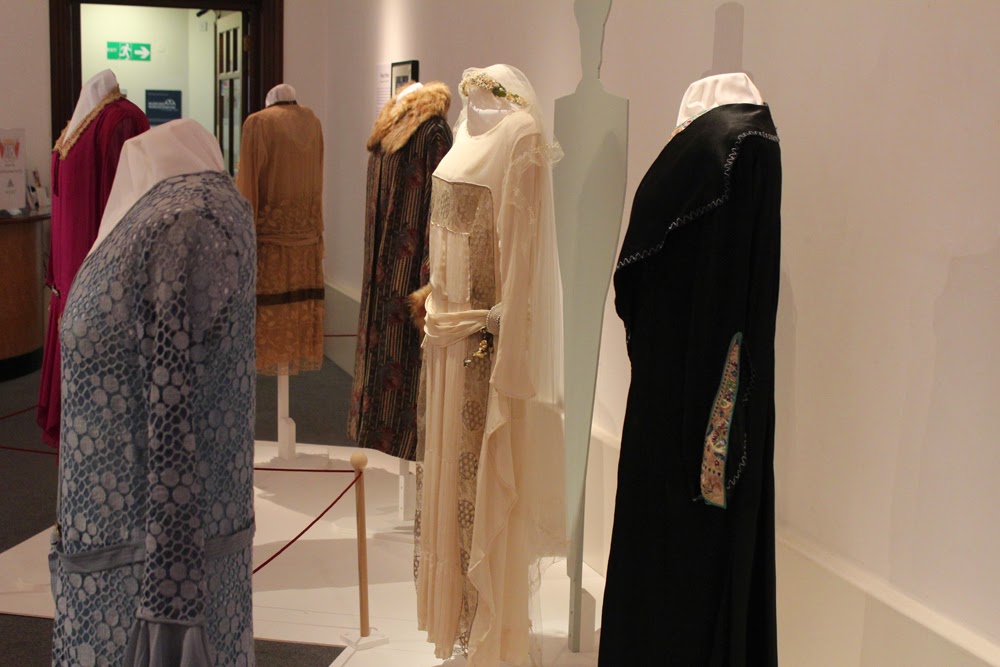 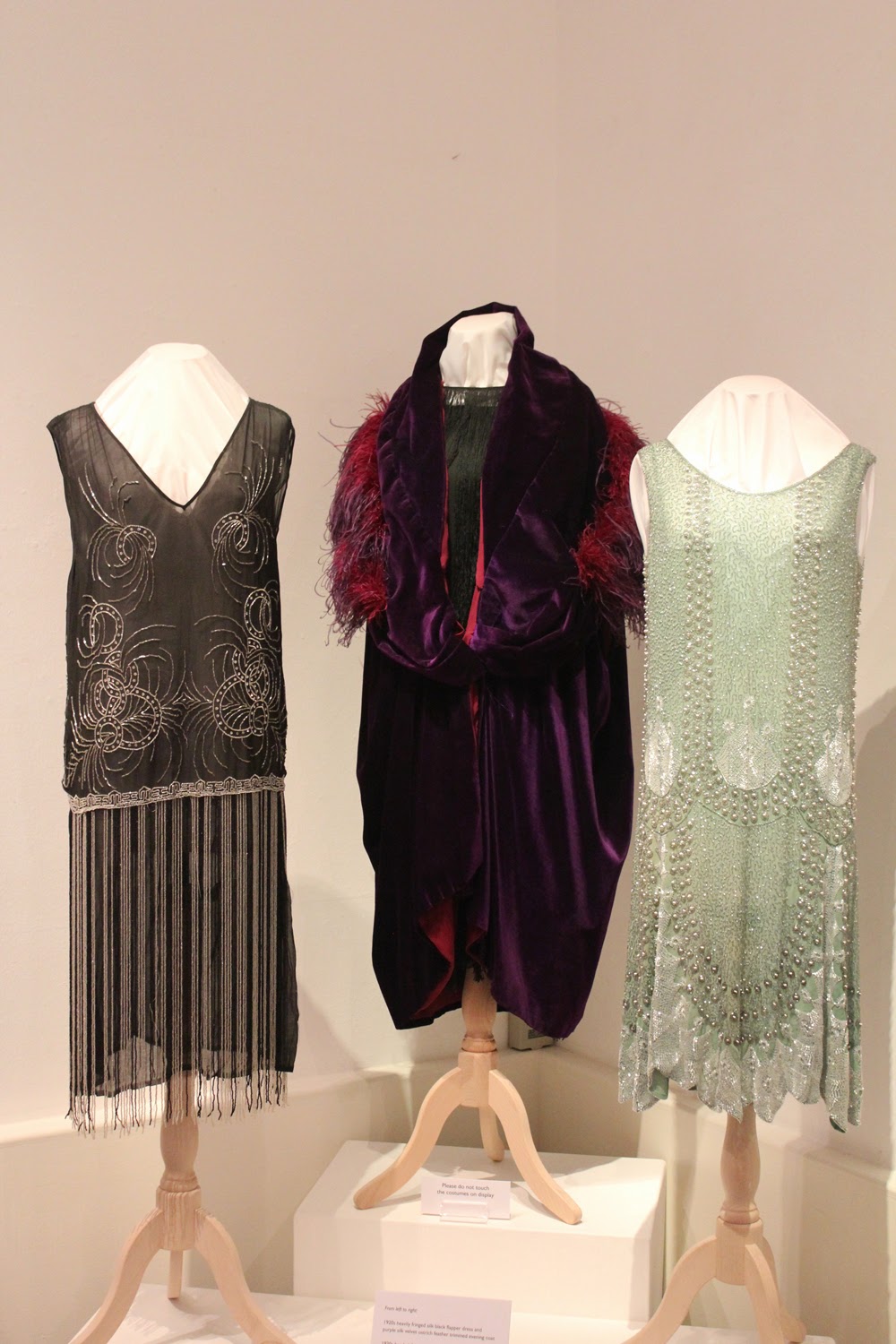 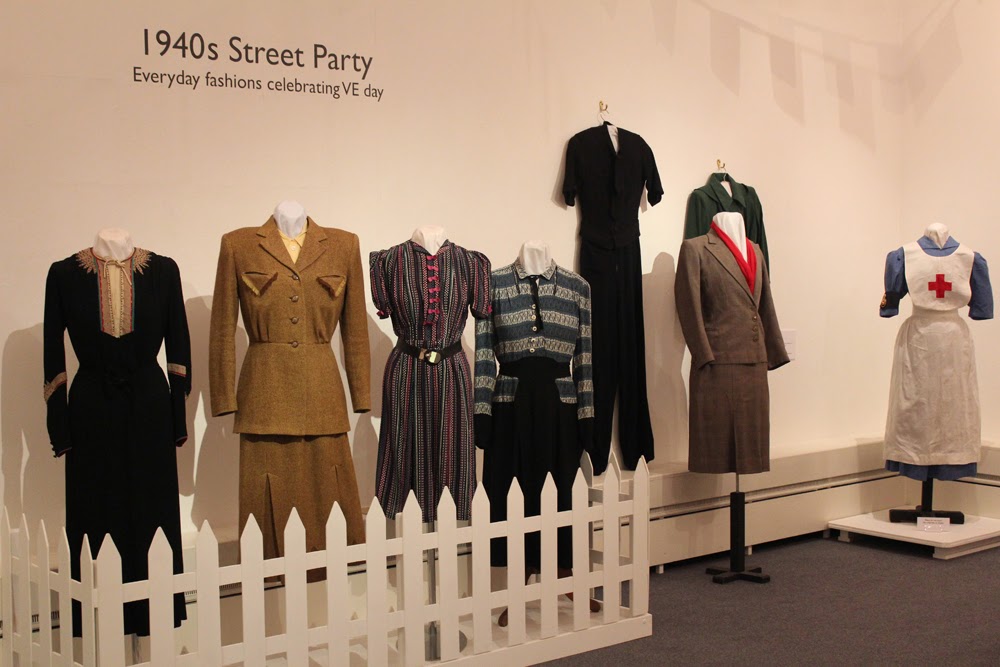 Posted by Jo Waterhouse at Wednesday, November 26, 2014 No comments:

We were lucky enough to have TV station Forces TV come and film our 1940s fashion show on Saturday. Reporter Hannah interviewed Clare about wartime fashion and rationing and even took part in the show herself as one of the Land Girls!

To see the full feature, CLICK HERE. Thanks for coming Hannah! 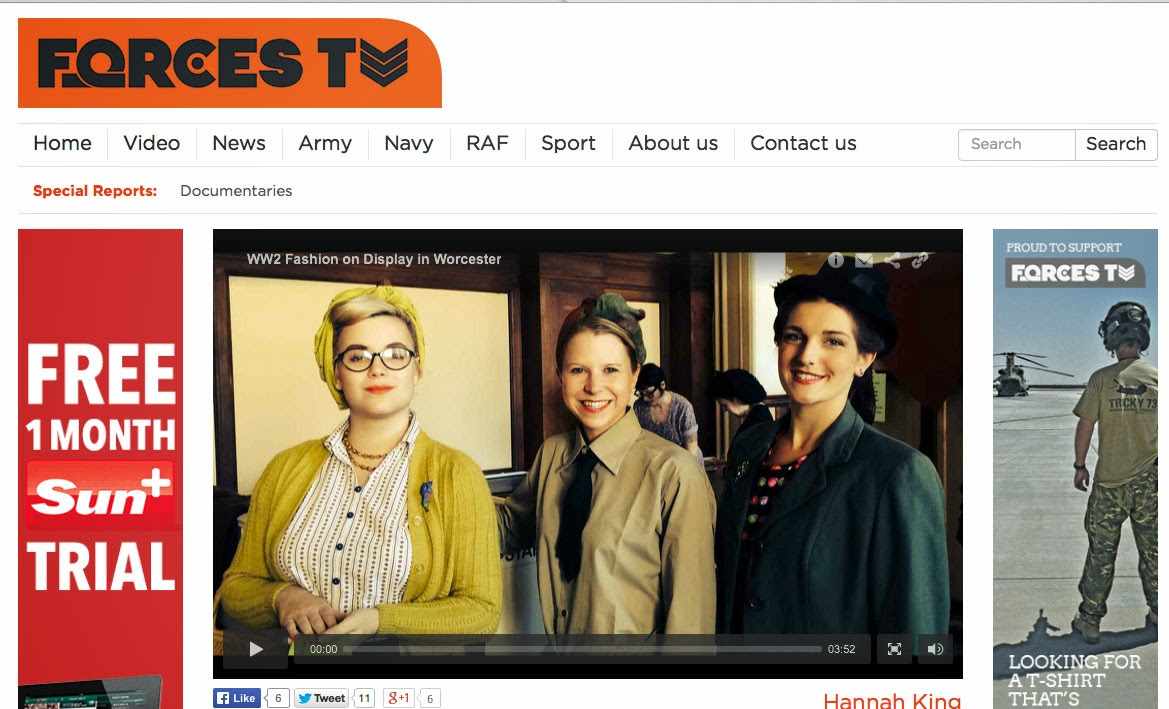 We also got a great mention about the show and TV coverage in the Worcester News - see the article HERE.
Posted by Jo Waterhouse at Tuesday, August 12, 2014 No comments:

Here's just a snippet from our 1940s fashion show 'Puttin' On The Blitz' at Worcester Museum & Art Gallery!
Posted by Jo Waterhouse at Tuesday, August 12, 2014 No comments:

Puttin' On The Blitz at Worcester Museum & Art Gallery

Thanks to everyone who came along to see our 1940s fashion show 'Puttin' On The Blitz' at Worcester Museum and Art Gallery on Saturday!

We had a full house for both shows and even had Forces TV come and film the show and behind the scenes for British Forces News! The lovely reporter Hannah even did a turn as a Land Girl for the first show, see her photo on their Facebook page HERE.

A huge thank you must go to our fantastic models! They did such a great job on one rehearsal and just a frantic morning of fittings. We were really pleased with how everyone looked and managed to do fittings, hair, make up and run throughs in just three hours before showtime, and Clare even squeezed in a TV interview!

Look out for our video of the show coming soon, we'll post it on here. In the meantime, here's a few photos from the day.

Here we all are with our equally fantastic compere in the middle, Suz Winspear, an experienced performer who relished the role as the glamorous lady compere -

We hope you can make it to the FREE 1940s fashion show we're organising this Saturday 9th August at Worcester Museum and Art Gallery! It's part of the Summer events for our exhibition Fancy Pants and part of The Worcester Festival also launching the same day!

There will be a great mix of original 1940s and reproduction outfits on display including day, evening and workwear.

There's two repeated shows, one at 1pm and then again at 3pm with some free refreshments. Hope to see you in the audience! Hey ladies! We're organising a free 1940s/war time fashion show called 'Puttin' on the Blitz' as part of the Fancy Pants programme of events and the Worcester Festival. It's taking place on Saturday 9th August and we're looking for volunteers to bring the fashions of the past to life!

If you've ever fancied stepping back in time and having a 1940s makeover for the day then sashaying down the catwalk, do get in touch!

You'd need to be available from 10am on Saturday 9th August for fittings and a rehearsal for two shows at 1pm and 3pm. The day will finish after the last show. All ages welcome and we've clothes up to size 16.

Let us know if you can join us, the more the merrier! 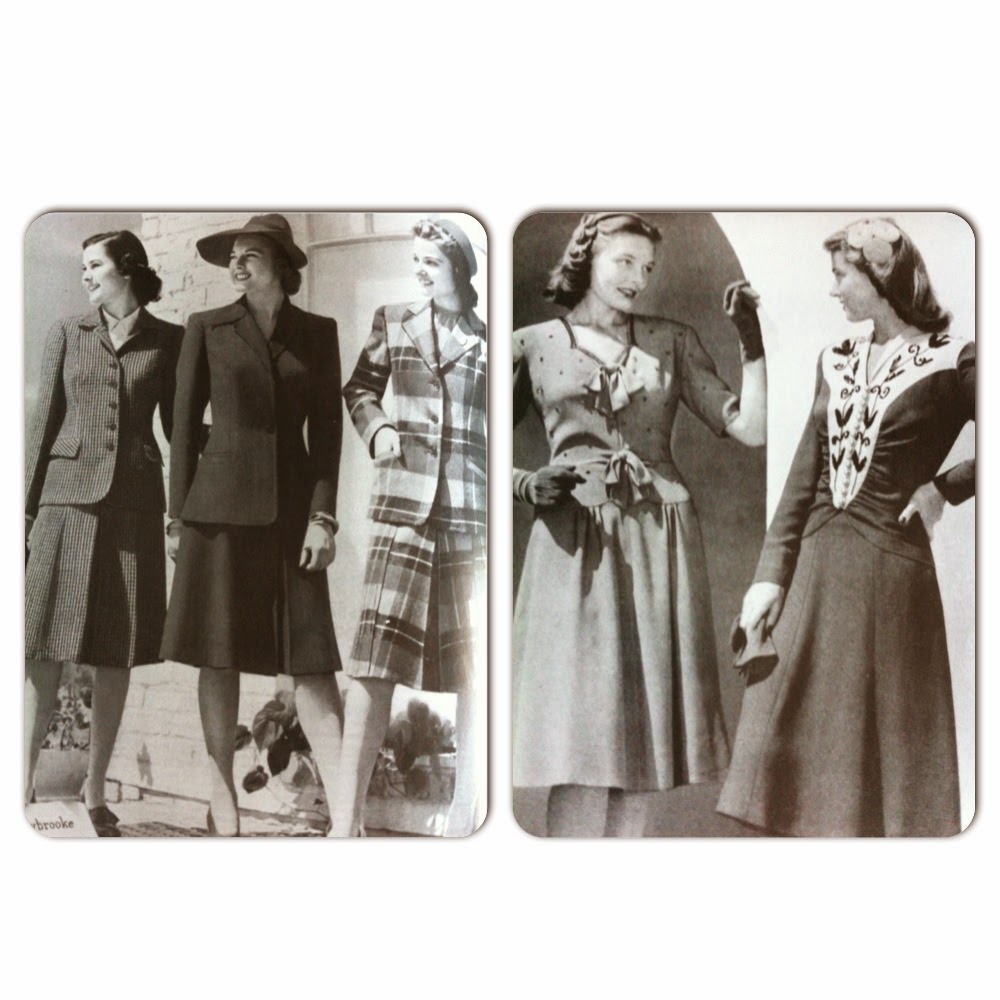 The 1940s were dominated by the war years, which of course was a huge influence on the fashion of the time out of necessity, restrictions and also respect for the war effort.

Women worked harder than ever but the ‘We Can Do It’ and ‘Of Course I Can’ propaganda of the time meant they also did it with style and pizzazz.

Certain fabrics and materials were scarce and were valuable resources for the war effort, so UK clothing was rationed from 1941 until 1949. Clothing coupons were required, limiting the amount of clothing people could buy. Rationing increased as the war went on as raw materials became scarcer and more precious, and it became harder and for people to buy new clothes.

The CC41 (Controlled Commodity 1941) label was introduced by the British Government and put on clothing and other items including furniture, designed to meet new standards of utility and non-wastefulness. Clothing was streamlined so that there were no unnecessary pockets, buttons or other details.  Hemlines rose again in the Forties to just below the knee for day wear, which meant less fabric was needed to make a dress or skirt. Don’t be fooled into thinking that this meant style was sacrificed, the Government enlisted the help of amongst others, renowned designers Hardy Amies and Norman Hartnell (dressmaker to the Queen) to create the compact CC41 range to boost morale. So a working woman could hold her head high in ‘designer’ utility wear.

The Forties saw more women than ever before join the workforce, taking up posts previously held men who had gone off to fight and many new fashion styles for working women were born from practicality. Everyday clothing took on a practical, patriotic and even a pseudo military look so Women's suits often resembled uniforms.

This was the decade for sharp tailoring on a budget. Despite the long lines and wide shoulders of jackets, the emphasis was on the 'nipped in' waistline for a feminine silhouette, the wide lapels and extreme, padded shoulders accentuated this. It's clear to see that the 'power dressing' trend of the 1980s was directly influenced by the strong working women of the 1940s.

Women literally wore the trousers in this decade and ladies who were young and fit enough were required to work in factories and on the land, if they hadn’t already joined the Voluntary Services or Armed Forces. The high-waisted work pants or slacks, usually had buttons at the side. For the first time wearing trousers became more widespread particularly amongst young working women. It was not always a welcome change though, and some women flatly refused to wear a pair!

As well as sombre, military coloured garments there were also new, bright colours too. These attempted to counteract the limitations in clothes manufacturing and jolly-up outfits. Women also became adept at cheering up hats and clothes with feathers, felt flowers, beading.  It was however deemed unpatriotic and in bad taste, to be seen to be looking too extravagant with your wardrobe.

It was the era of the 'make do and mend' initiative and everyone was encouraged to make the most out of what they already had, particularly when clothing coupon allowances shrank year by year. Girls became more imaginative creating new looks from something old, even men's suits were cut up and remade as suits for ladies.

Handmade accessories meant that women were able to change their appearance for relatively little expense. Hats, gloves, bags, scarves and brooches could all be made at home from felt and other materials. Sewing, knitting and crocheting were popular ways to make new items on a budget. Fair Isle knitting patterns were a particularly popular style in Forties Britain for men, women and children, a traditional style that can still be bought today.


The tea dress, afternoon dress or floral day dresses are a key look of this era, and one that's often replicated by re-enactors and Forties enthusiasts. They are usually cotton or rayon shirt-waist, or shirt dresses, in a plain or patterned fabric. The shoulders would be wide, the waist fitted and belted, with a slightly flared skirt ending just below the knee.

Hats were very distinctive in this decade. There were a variety of hat styles and shapes and many hats were homemade from felt or hand knitted, or reconstructed from men’s hats. The ‘tilt’ hat worn angled down on the head was a particular popular hat style, they were often elaborately decorated with flowers or feathers.

Headscarves we're hugely popular, especially worn as turbans, which were a practical way of keeping your hair clean and tidy during a day in the factory, and were a cost effective alternative to a new hat. Turban scarf hats could be tied more elaborately and decorated with feathers for evening wear or for a smart occasion.

Famous Forties hair-dos such as the Amercian 'Victory Roll' were also born out of a practical need for women to keep their hair out of their eyes and out of factory machinery. This is a perfect example of the practical glamour of the Forties: hair wasn’t just scraped back, elaborate new up-dos were invented!


A Forties gal’s shoe collection was nothing like it is today. It would be limited to just a few pairs: mid-heels, or masculine flat shoes for factory and land army workers. There were higher heels, platforms shoes and wedges around in the Forties, but these were predominately reserved for those who could afford them or for stars of stage and screen.

Practicality was primary for everyday wear during wartime, but as we can see, that didn't mean that fashion was forgotten. So many key styles of the 1940s e.g: shoulder pads, sharp tailoring, head scarves, tilt hats, platform shoes, floral prints, just to name a few, would be revived at different times all throughout the 20th century, as designers were inspired to revisit and rework some of the icons of this decade.
Posted by Jo Waterhouse at Monday, July 21, 2014 No comments:

Fancy Pants: A Celebration of Style 1920 - 1945, was the Summer exhibition at Worcester City Museum & Art Gallery. Clare Bridge from Second Hand Rose vintage and Jo Bourke explored the county clothing collection for fashionable vintage style, from 1920s glamour to the fashion on ration of the war years.
This blog documented some of the research process, background information and preparation for the exhibition launch. 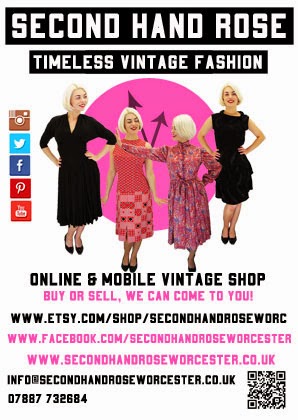